Where the Wild Things Roam II

Where the Wild Things Roam II

As mentioned in our previous post: While photographing the bison we could hear faint howling off in the distance somewhere. We wondered if it was wolves or coyotes. After capturing such magical photos of the bison, we decided to head off for another adventure in search of more wild things…

Today was the day that offered a moment every outdoor wildlife photographer could hope for. What began as wonderment, from the sounds of howling, turned into being something quite extravagant.

As we eagerly headed towards the howling next to Kelly Springs, my wife noticed something peculiar laying in the snow. It was at that moment we concluded the coyotes were the wild things roaming around while making their great howls known.

Luckily, we were the first ones to notice this resting coyote. Ironically, he happened to be fairly close to the road. This is a rare sight, as normally coyotes do not get this close to the road unless they’re about to cross the highway.

What a remarkably amazing day!

I went ahead and grabbed my camera, set up my tripod and got everything set to the exact position that I wanted. And we waited…. As we were waiting, several people pulled up and asked if we spotted a wolf. Once we relayed that it was a coyote they lost interest. Usually the reply was, “Oh, it’s not a wolf?, and we would respond back saying, “No, it’s a coyote”.

It’s astonishing how most people here undervalue the beauty and strength of these wild things. The coyotes are among other magnificent creatures that survive the harshest winters in the most enchanted land in the world.

This coyote in general has been observed by us throughout the entire season. It is through this that we have come to fully appreciate the coyotes of Yellowstone Country.

The resting coyote we were eager to take pictures of was in no hurry to move around much. After about an hour or so of waiting, we began to build up a crowd of around 10-15 different cars. Finally, the coyote started to wake up. 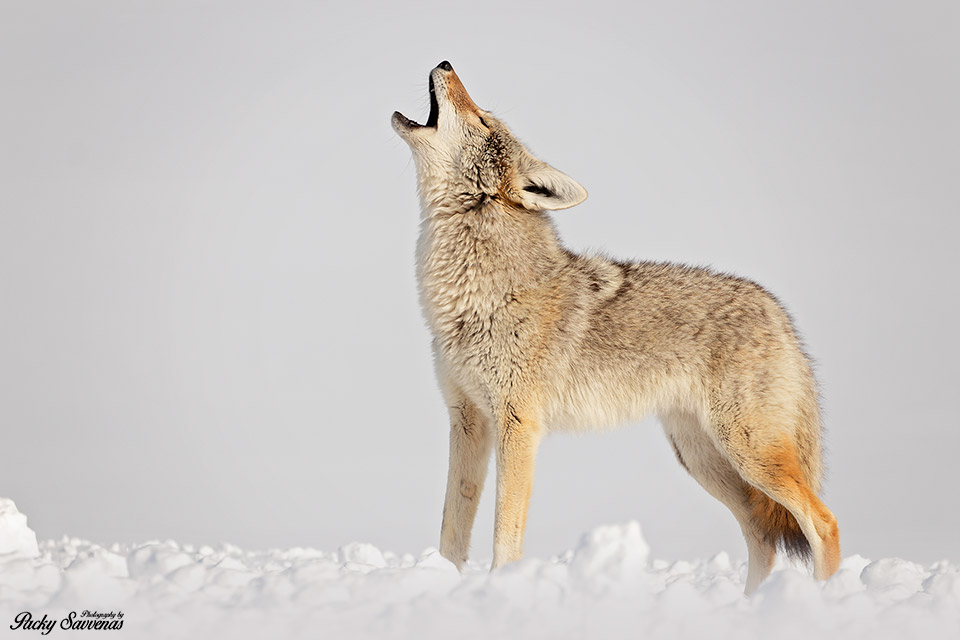 The moment we were waiting for was here! First he started stretching, and then the show began. With moves like that, it was as if he was on the payroll. He went from stretching to howling. Then he started posing and acting like a puppy, as he started to roll around in the snow.

After all that, the coyote was on the move. His actions were quite intelligent, as now there were more people around. He tricked us into thinking he was going one way and then heading off in the other direction. As the coyote lost several people with his tactic move, we kept our sights on him and continued to follow his route.

With this coyote’s great intelligence and fearless demeanor, he came to be known as “Coyo the Great & Fearless”.

With such a minimal distance between us, at one point he actually started running straight towards me and another photographer I met that day. We thought he was going to charge us… Coyo, the coyote had other plans though. He veered to the left and that is when I started to snap my photos.

Howling Among The Mist – The Great Coyote

While photographing the bison we could hear faint howling off in the distance. We wondered if it was wolves or coyotes.

After capturing such magical photos of the bison, we decided to head off for another adventure in search for more wild things…

Here’s a preview of our next same day adventure. Stay tuned!

This place truly is magical; it’s where the wild things roam.

Contact Us
PrevWhere The Wild Things Roam
A Frosty BisonNext