Where The Wild Things Roam

Where The Wild Things Roam

The place we call home is raw nature at its best. This is where the wild things roam. They are wild, they are free, they are the raw spirit within you and within me.

After spending a week of being pounded by record snow, the month of February ended with the Wyoming title of “Februburied“.

I was somewhat hesitant about going out and photographing wildlife today. I figured with drifts nearly four to five feet high, that you practically cannot even see over the roads. I assumed that none of these animals would be visible or even around. In all actuality they’re all in town.

It was later in the day around golden hour when I headed off to take my normal route. I came around a bend in the city of Kelly, right outside of Jackson, hoping to find a opportunity. My eyes glanced towards the stream where I had previously photographed a muskrat.

The scene is quite breathtaking, even buried amidst the snow. This stream happens to be naturally warm due to being a part of Yellowstone’s Ecosystem. The mist emits from it, giving it a presence of something beautifully eerie.

I started to drive up and about a mile out and noticed about 20 big objects off in the distance which I figured were bison. This is a very well-known route and by the time my wife and I arrived we were the first ones there. I don’t know if these bison just happened to arrive in this area at that time or if they had been there for awhile.

It just seemed odd that the bison were in sight and nobody really cared.

I never thought about the fact that this stream would actually melt the snow around it, allowing the animals in the area to get whatever grass or feed that they needed just to help survive the winter.

As we pulled up I noticed the steam emitting from the stream where the bison were hanging out. This allowed for a very mystical photo-shoot.

You can actually see in a picture here, that my wife took of me, that the snow is as high as the fence right next to the road. This made for some amazing photos. Keeping my distance, I was able to get eye level with the bison while the sun highlighted the mystical creatures within the mist. 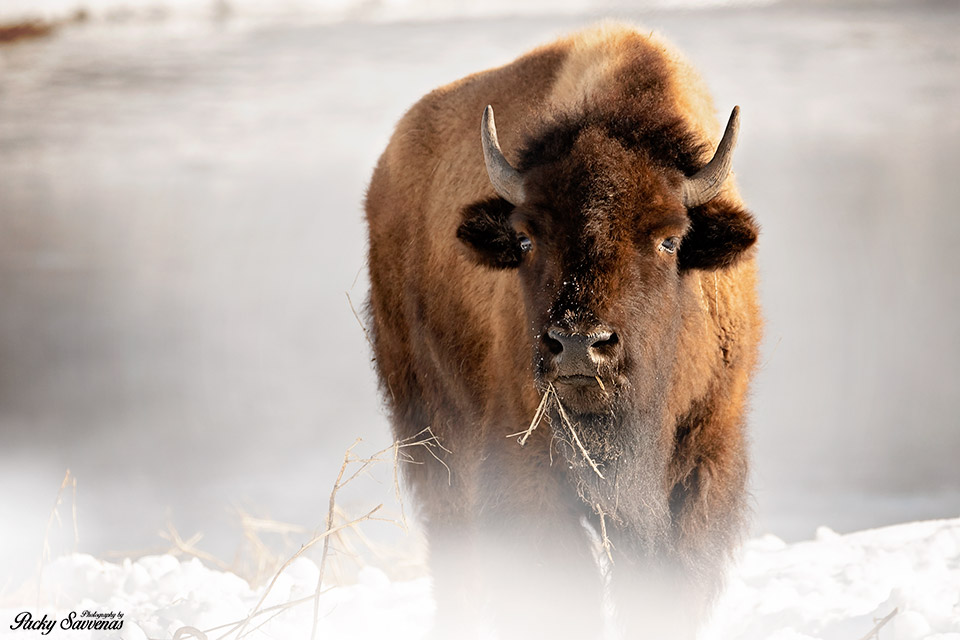 I feel these are some of the best bison photos I have ever taken. But I’ll let you guys be the judge of that…
Please comment and let me know what you guys think.

While photographing the bison we could hear faint howling off in the distance somewhere. We wondered if it was wolves or coyotes. After capturing such magical photos of the bison, we decided to head off for another adventure in search of more wild things…

The place we call home is raw nature at its best. This is where the wild things roam. They are wild, they are free, they are the raw spirit within you and within me.

Stay tuned for our next same day adventure.